United Nations asked to help stop the spread of windmills in Scotland. 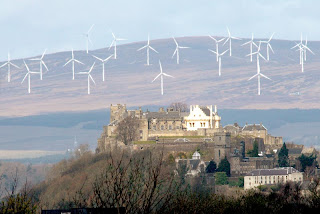 The SNP's plan to cover Scotland in windmills has been challenged at the United Nations by Christine Metcalfe, a member of Avich and Kilchrenan Community Council

The UN committee was shocked to discover that despite the pronouncements of Fergus Ewing MSP and First Minister Alex Salmond, the Scottish Government’s Renewables Routemap 2020 and Energy Policy Statement are still officially only drafts.

Officials have relied on these drafts in giving the go-ahead for wind turbines, granting planning without proper scientific justification based on a draft.

The SNP have to formally reply back to the UN on a set of questions about their renewables policies by the 11th February in advance of the March Compliance Committee meeting.

Questions for the SNP from the United Nations...

• Under Scottish law, is there a specific obligation that information about comments received during the EIA procedure is available before the decision is issued?

• Please elaborate on why the Renewable Energy Routemap, is a policy rather than a plan/programme.

Wind farm planners regularly make claims for the output of the farms that are never challenged in the media.

1.Energy outputs are usually only a quarter of the level claimed.

2. Contracts to wind farmers in the offshore sector will see payments to wind farms even when the energy is not required or isn't available adding £17Bn to customers energy bills. The generosity is similar to the PFI scandal.

3. We never hear of the requirement for 100% back up from conventional power stations for when it's not windy. Or too windy.

4.The millions of tonnes of concrete and metalled roads etc are never mentioned

5. The devastation to wildlife is never fully recognised.

6. Even young children are used to spread the windmill propaganda.

With the met office finally admitting that man made global warming is a myth then maybe the United Nations can persuade the SNP to stop the madness of expensive and inefficient windmills destroying our beautiful country.

PS. There's a cold snap forecast for the next 2 weeks in the UK so I wonder how our 3,600 windmills are doing at the moment ?

Windmills are currently providing 1.2% of our energy needs. Better than during the last cold snap when I saw 0.3% at one point I suppose.

Coal and Nuclear are currently providing 76% of our needs with 6% being imported from France and The Netherlands.

We might be in trouble when we decommission our coal and nuclear power stations.