The proposed referendum question for Scottish independence has now been settled and will be "Should Scotland be an independent country? Yes / No "

The previous question that was proposed was "Do you agree that Scotland should be an independent country? Yes/No” and was found to be potentially biased in favour of a Yes answer."

There has been a lot of debate about the question and The Guardian cartoonist has been having fun.. 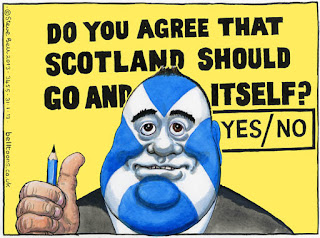 One of the words in the cartoon is hidden and the general consensus is that the word is SAVE or HELP or FREE by voting for independence.

(UPDATE 1st Feb 2013. There has been a lot of debate about the actual meaning of the cartoon. Some thought it may have been referring to the alleged foul language of the PM David Cameron when talking at PMQ's. However The Guardian have cleared things up and are quoted as saying " It’s a commentary on Alex Salmond’s vision of an independent Scotland and reflects Bell’s view it would be against Scotland’s interests." )