Some music for St Andrews Day.

Posted by Unknown at 23:22 No comments: Links to this post 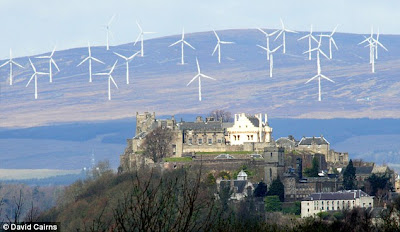 Brass monkey weather today with the temperature hovering around freezing and plummeting below freezing overnight. The UK is sitting in a typical winter high pressure zone so the wind speed has fallen to almost zero.

Demand for energy will be at it's peak so I wonder how much our 4,000 windmills are providing to keep us all cosy ?.....

I'll save you the bother of checking. They're supplying 0.3% at the moment. With hydro supplying about 1%.

I'm not sure if it's worth destroying our beautiful landscape for such a poor return on the cost and decimation to the scenery.

Of course landowners and energy companies get paid whether the blades turn or don't turn so the windmill building will continue.

Posted by Unknown at 12:25 No comments: Links to this post

Palau rejects move by Palestine to upgrade to a UN non member state. 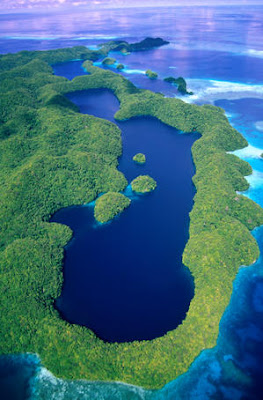 In a surprise move yesterday, the tiny state of Palau (pop 20,000. GDP £178m), rejected an attempt by Palestine to upgrade to a UN non member state. However the attempt was backed by other members of the United Nations and Palestine is now a UN non member state. This will give it the status of the Vatican in Rome which is sometimes referred to as a 'Holy See' position at the UN.

As a 'state' it is "neither dependent on nor subject to any other power or state" giving it more authority than the UK which is subservient to the EU in the majority of law and legislation.

Palestine will also have a seat at UNESCO. whose motto is 'Building Peace in the minds of men and women'.

Posted by Unknown at 10:05 No comments: Links to this post

Witnesses will have to up their game.

I had my periodic visit from the Jehova's Witnesses the other day and wasn't so impressed with their efforts to convert me this year. Poorly briefed and easily persuaded to leave me to Satan was my overall impression of them.

At least last years pair were good sports and returned a couple of times to continue the sparring. Finally giving up and shouting that they "weren't paid to visit me" as they stomped off to the next soul to save.

There is always a dominant one and a quieter one. Maybe it's the good cop / bad cop approach that they think will work for them.

Although I don't believe in the supernatural I do like most religious folk because they are always polite and aren't likely to cause any offence or trouble. If we had more of them then we would be a safer and calmer society. It doesn't surprise me that they tend to live longer than atheists ( according to a BBC documentary last night ...it must be true it was on the telly ) as they have a huge family to look out for them to see them through trouble and strife. A bit like the freemasons I suppose.

The session started the same way. What is wrong with the world. I opened with Gaza and the never ending cease fire / flare up. And why could a God let all this happen. Children blown to pieces and Him doing nothing about it etc. Out came the bible with quotes with their solutions and the the reasons why God couldn't always intervene. It was Satan's doing. He fell to earth as a broken angel and will be sorted out in the next coming of God etc.

Then I always say why should I believe anything you say if you believe that humans have only been on the planet for 6,000 years ? They counter that it's true because it's in the bible and therefore it's true. I ask about the fossils of humans that are carbon dated to 100,000 years old. This year they countered that the fossils were obviously contaminated by the surrounding rocks and stuff. Last years Witnesses said the fossils were put there by Satan in order to confuse us and lead us away from God.

I usually laugh then and and ask if they're serious. They usually try another tack and try to lead the conversation somewhere else.

This years pair weren't up for it at all and after a shuffle back and forward with the Witness literature ( Watchtower / Awake things) they finally decided not to leave me 'with something to read until next time' and stormed off.

I don't think they will look good in their 2 year report.

Posted by Unknown at 00:38 No comments: Links to this post 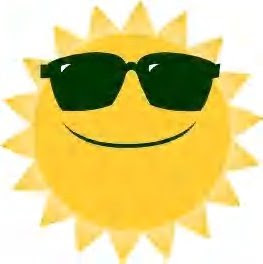 " Good Evening. Tomorrow will be very cold but there will be blue skies and beautiful sunshine all day. It will stay clear overnight." ( copyright STV /BBC etc news)

In the real world today... 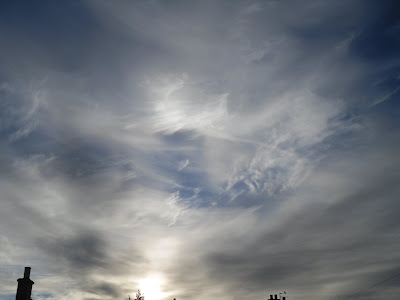 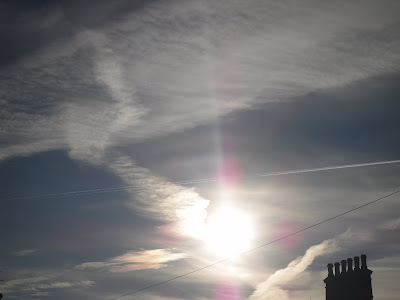 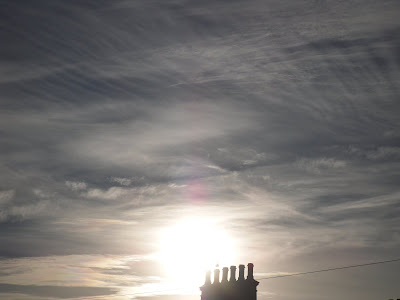 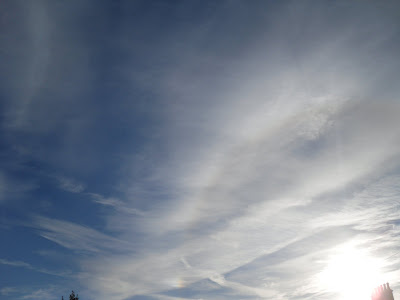 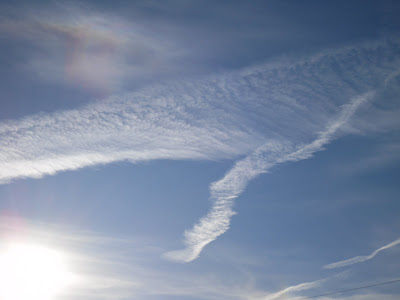 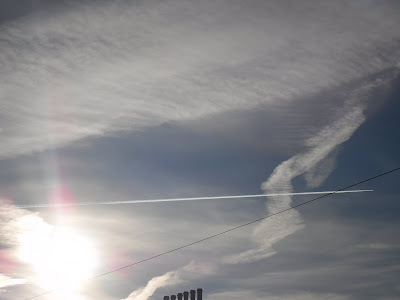 After about 30 of these overflew Monty Towers in a couple of hours... 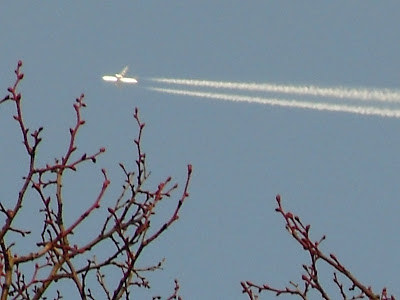 So to all the blinkered 'weather forecasters' I say.. 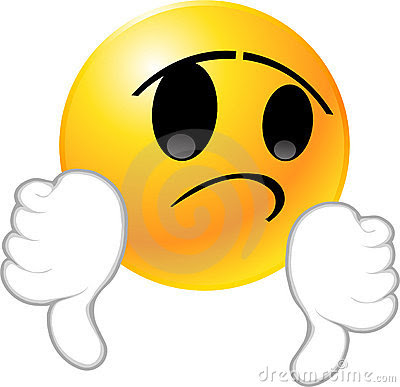 Posted by Unknown at 16:06 No comments: Links to this post 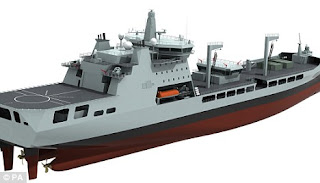 I'd always assumed it was a couple of generations. Certainly more than 9 months

This was in response to the threatened closure of a shipyard in the UK and whether it would be the Scottish yard that would close due to the 'threat' of independence for Scotland.

I was doubtful about his statement. I know our fleet of submarines wouldn't operate without assistance from our allies in the USA.

And then I found this at the Daily Mail from 9 months ago...

" Defence Minister Peter Luff announced yesterday that a £452million contract for the support tankers had been awarded to Daewoo Shipbuilding and Marine Engineering. Critics said the decision was a blow to Britain’s declining shipbuilding industry and to the proud naval tradition of what was once the world’s greatest seafaring nation."

" The tankers that are being bought ‘off-the-shelf’ from South Korea will maintain the Navy’s ability to refuel warships at sea and will provide support for amphibious and land forces close to shore."

If Scotland got independence then we would be in a better position to tender for orders from the Navy. We could bid as part of the British Isles as Labour's Jim Murphy prefers or we could bid as a 'foreign land' as the Tories seem to prefer.

Of course if UKIP win at Westminster then we're stuffed. They back whoever is part of the UK. End of.

Posted by Unknown at 19:56 2 comments: Links to this post 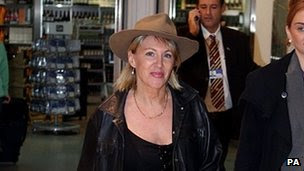 There were sighs of relief today as British MP Nadine Dorries returned safely to the UK after going missing in the jungle for a few days.

Popular Conservative MP Ms Dorries was held captive in the jungle on the other side of the world and was forced to endure torture and mistreatment. At one stage she was buried underground in a makeshift coffin and covered in maggots... 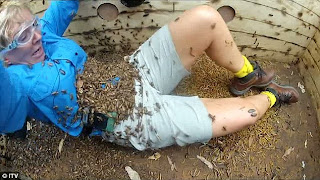 Ms Dorries was also forced to eat testicles, camels toe and ostrich anus in a sickening display that was filmed and shown around the world... 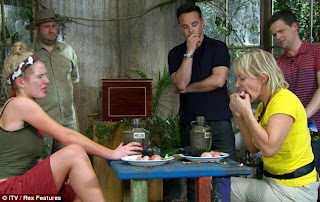 She was also forced to stand in stress positions with other hostages and entertain the captors with stories and jokes... 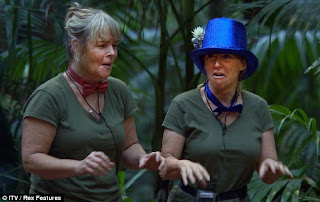 Ms Dorries eventually managed to swim to safety and contact her frantic family and constituents who were worried sick about her... 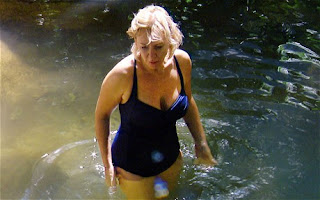 Posted by Unknown at 17:01 5 comments: Links to this post

I'm not sure if it was a good idea to go hillwalking and kayaking in the middle of November. But never mind. I survived and am home safe and well. I think it rained every day. We were staying in a lodge on Loch Tay and the views were fantastic.... 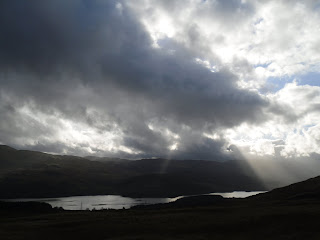 Sadly a lot of the scenery is now being decimated as they clear the hills for windmills... 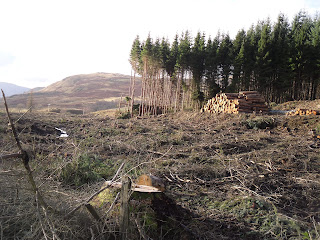 I also managed to get a few games of golf while I was away. Killin Golf Course is worth a visit if you're in the area. There's no starters box in the winter and they have an 'honesty box' where you put in £10 and can play all day if you like. The greenkeeper was pottering about and tried to keep me on the right track. The first tee was cool.. 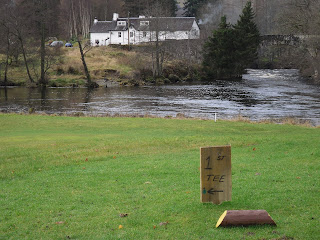 I wasn't sure about the 4th tee as it said 'beware golfers crossing from left to right' so I aimed for the gap in the wall and hoped for the best.. 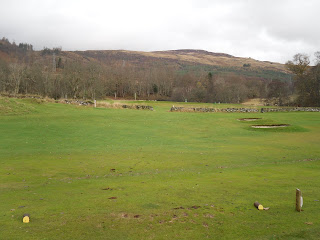 Whenever it looked like there would be blue skies they were quickly filled in with trails from low flying planes. I wish they would give us at least one day off ! ... 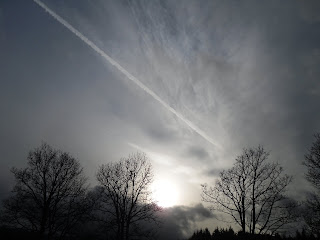 The trails made for some 'interesting ' photos I suppose... 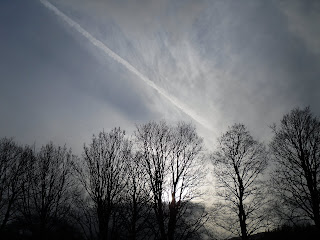 There was a lot of flooding in a village near us called Comrie so we kept north of the loch on the Killin / Kenmore side. This dam on the road up to Ben Lawers seemed to merge into the scenery quite nicely. Something that windmills will never do... 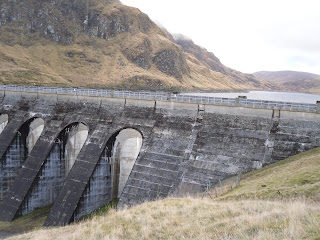 The only drawbacks of where we were staying was there was no pub within walking distance and no access to the internet. Oh and some of the drivers are maniacs. I'm surprised there aren't more accidents. Driving in the middle of the road seems to be compulsory. Especially on blind corners.

I stopped going to organised bonfire nights when a health and safety officer in suitable dayglo vest took my sparklers from me as they were no longer allowed. I was in my 40's then and had been using sparklers for 40 years without a mishap.

Bonfire night used to be planned for months in our street and we would protect our woodpile from marauding gangs from other streets. Taking turns to guard it and make sure it was kept dry as November the 5th approached. The only mishap I had was when I stood on a piece of wood that had a rusty nail in it which went through my foot. Ouch.

A week before bonfire night we would make our 'guy fawkes' then drag it around the houses asking for a 'penny for the guy'. The money would pay for the fireworks and some sweets. We would always go mob handed as the threat from other gangs was always at it's height when cash was involved.

November the 5th would always be frosty and dry and the fire would warm everyone up. A few sad rockets would be fired from a milk bottle and the highlight of the night would be the roman candle and the catherine wheel. Jumping jacks and bangers would be thrown around to add a bit of excitement. Everyone had a packet of sparklers and would try and make patterns with them. Someone would throw some spuds into the dying embers of the fire and we'd eat raw potatoes with a burnt skin.

Looking back it doesn't really sound that exciting after all. Although it did at the time.

Oban still has the record for the fastest fireworks display..