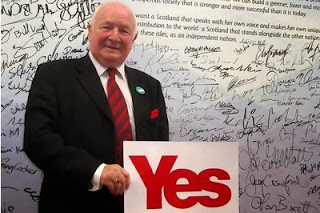 Heartening news from Glasgow where the former Labour Lord Provost Alex Mosson has come out in support of independence for Scotland.

" This is not a time for party politics. The decision we'll be making next September is too important for that. People need to realise that this is not about the SNP, Scottish Labour or any other political party.

This referendum is all about us, the people of Scotland, and our right to self-determination. Once we achieve independence I'm sure people will start to regain their interest and engagement in politics, and that will be a good thing for democracy.

But first we need to find our self-confidence and become a successful, more prosperous and fairer nation. I am totally convinced that only a Yes vote will get us to that point."

Couldn't have said it better myself Alex. Welcome aboard.