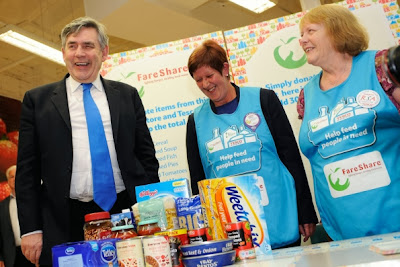 The former PM Gordon Brown ( above left... feeding the starving in Kirkcaldy ) has been on his worldwide speaking tour for so long now that he woke up on a couch in Qatar and declared that he was an 'ex politician'.

Luckily he was only talking to a BBC beeboid so everyone had a good laugh about his 'gaff'. He's actually still an MP for Kirkcaldy and Cowdenbeath apparently.

While Grangemouth was being put through the ringer by the Labour Party and Unite, Gordon was going loco in Acapulco. He's now turned up in Qatar.

His speaking tour has netted £1.3m for "The Office of Gordon and Sarah Brown Limited ".