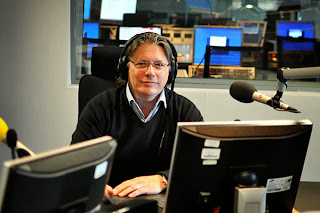 The former BBC Scotland broadcaster Derek Bateman has been writing a witty and informative blog about his time as a newspaper journalist and as a presenter on Radio Scotland.

He confirmed our suspicions that the top management at BBC Scotland are Labour / Unionist supporters when he said that John Boothman, the Head of news and the partner of the former Labour health minister Susan Deacon "was a clear asset to the BBC because of his Labour connections. They were key to his career and were valued by all."

I'm looking forward to reading Mr Bateman's blog although I'll be wary of it turning into another false flag. It started with a bang about BBC bias but we're now hearing about the 'steely professionalism' of Kirsty Wark .......Spanish holidays with a Scottish Labour leader and vitriolic interviews with Alex Salmond and the SNP aren't professional.

In another of his blog posts he wonders if Kaye Adams is biased ( sic ). He thinks she's maybe just doing what she's told by the producer speaking in her ear.....the only obeying orders gambit ?

Luckily Kaye is moving to 'Loose Women'. One to miss even more fervently now.

So hopefully his blog isn't a smokescreen to cover the inbuilt bias and hatred at BBC Scotland against Scottish independence and is a warts and all expose of the Unionist propaganda transmitter that is BBC Scotland.

The Scottish independence referendum is drawing near and there is still no sign of international monitors being called in to control the BBC and ensure a fair referendum.

It's good to record the evidence from Derek Bateman's blog of the institutional bias at BBC Scotland but this will only be academical for future generations to ponder over if it isn't acted on now while it can still be stopped.